A Mt. Orab, Ohio homeowner has a home that was originally built in 1894.  The home has a stone foundation with a concrete floor.  The homeowner was concerned about the drainage in the basement and also a concern regarding the presence of mold.  The homeowner called The Basement Doctor of Cincinnati for a solution to this problem.   He met with Mike, a Certified Inspector, who recommended that WaterGuard Basement Waterproofing System, CleanSpace Wall System, a FloodRing, SuperSump Premier Sump Pump System, Glass Block window, Spray Foam, and a SaniDry Sedona is installed to resolve this problem for the homeowner. WaterGuard Basement Waterproofing System is a piping system installed along the foundation walls to intercept water that is seeping into the basement.  The water is then pumped out of the basement through a sump pump system, such as the SuperSump Premier Sump Pump System. The SuperSump is a high-end 1/3 hp cast iron pump, it also comes with a WaterWatch Alarm that will sound if there is a pump or power failure.  A SuperLiner that will hold the pump and has 96 holes in the liner so that water from under the floor can seep through and also be pumped out of the basement.  The Airtight Lid is so strong you can stand on it.  It keeps water from evaporating back into the basement, keeps things from falling in, controls odors and quiets the pump.   Spray Foam Insulation was used to seal the rim joist.  This will keep unconditioned air from seeping in and making the home harder to heat and cool.  It will also keep condensation from coming in during the summer causing the basement and home to be more humid and humid air encourages mold growth. The SaniDry Sedona dehumidifier was also installed to filter and dry the air. The "Duet" filter removes mold spores, dust mite droppings, and other particulates from your air with a Large MERV8 filter with carbon for odor reduction. These systems working together the homeowner will have a basement that is dry and comfortable. 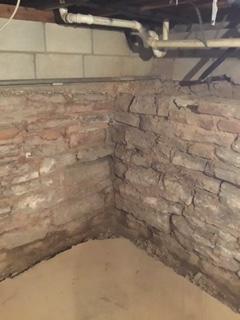 The trench has been dug at the bottom of the wall to install the WaterGuard Basement Waterproofing System. 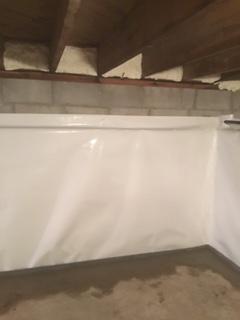 In this photo, you can see the finished WaterGuard. The CleanSpace has been installed and tucked into the WaterGuard to drain any wall leaks. At the top by the floor joists, you can also see the RimTight rim joist insulation.