A Cincinnati, Ohio homeowner called The Basement Doctor of Cincinnati after noticing that there was a crack in the wall of the semi-finished basement and there was a musty odor.  The home was built in the 50s, has a poured foundation and a sump pump had not been installed.  An appointment was scheduled with Roger, one of our Certified Inspectors, to help find a solution to these problems for the homeowner.

After meeting with the homeowner and doing a free inspection of the basement, Roger recommended that WaterGuard Basement Waterproofing System, a SuperSump Premier Sump Pump System, CleanSpace Wall System, and PowerBraces are installed to resolve these problems for the homeowner.

The pump system Roger recommended is the SuperSump Premier Sump Pump System.  The SuperSump is a high-end Zoeller 1/3 hp pump.  It includes the WaterWatch Alarm, SuperLiner and Airtight Lid.  The WaterWatch Alarm will sound if the water reaches the point that the pump should have turned on or during a power failure.  This will alert the homeowner to a problem with the system that needs to be resolved before damage occurs.  The SuperLiner has 96 holes throughout the liner to allow water to flow in from under the floor, it has a "pump ring" that centers the pump into the liner, and the liner will not cave in or crack.  The Airtight Lid is so strong you can stand or store things on top of it.  It also keeps water from evaporating back into the basement, keeps out bugs and odors, keeps objects from falling into the liner and also quiets the pump.

PowerBraces are used to permanently stabilize foundation walls and protect them from any further movement.  PowerBraces are zinc-plated steel beams that are secured tight against the foundation wall with brackets anchored to the floor and floor joists.  The PowerBrace's patented design allows them to be tightened over time and can potentially even reverse wall failure.

Now that the walls are stabilized, the WaterGuard, CleanSpace and sump pump are working together to intercept and pump out water from the basement.  The homeowner will now have a dry basement that will be ready to re-finish and used for extra living space and storage without worries of water intrusion. 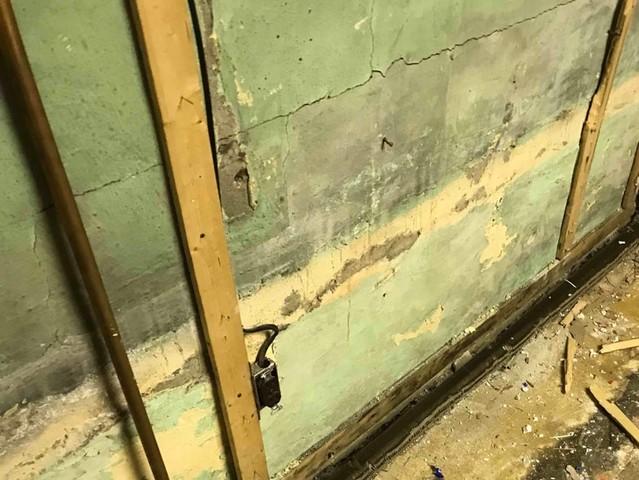 In this photo, you can see there is a crack in the foundation wall and that water has been seeping into the basement. 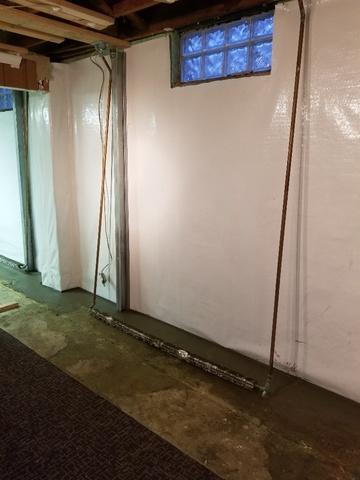