A homeowner of a 1950s home with a block foundation was experiencing some cracks in the walls that were leaking water and also a wall that was starting to tip in the basement.  The homeowner called The Basement Doctor of Cincinnati and scheduled an appointment with Donny, a Certified Inspector.  Donny recommended that WaterGuard Basement Waterproofing System, a TripleSafe Sump Pump System, CleanSpace Wall System, and PowerBrace System is installed to resolve the problems in the basement.

WaterGuard Basement Waterproofing System is a patented sub-floor piping system that is used to intercept the water that seeps into the basement.  The water is drained into a sump pump system, such as the Triple Safe Sump Pump System and is pumped out of the basement.  This keeps the basement dry for the homeowner.

The TripleSafe Sump Pump System is a three pump system.  The Primary pump is a Zoeller M-53 1/3 hp pump that will do the pumping most of the time.  If this pump would fail or become overwhelmed by a high volume of water the second pump will start pumping.  The second pump is a Zoeller M-98 1/2 hp high volume pump.  These two pumps working together can remove up to 6,200 gallons of water per hour out of your basement.  The third pump is an UltraSump Battery Back-up Pump that will pump water out of the basement during a power failure.  This pump comes with its own battery pack and charging station.

The CleanSpace Wall System is a 20-mil-thick reinforced plastic liner that is permanently attached to the basement walls with special drilled-in fasteners.  This is an economical way to cover walls and drain wall leaks unseen into the WaterGuard Basement Waterproofing System.  The bright white color really brightens up the basement and keeps the water that seeps in through the basement walls from permeating into the basement living space.

The PowerBrace System is steel I-beams that are secured tightly against the basement walls with brackets that are attached to the floor and floor joists.  The PowerBrace System immediately and permanently stabilizes the walls from further movement and has a special bracket that is designed to be tightened over time to potentially reverse the wall failure.  PowerBraces restore the property value and give the homeowner peace of mind.

Now when the water seeps into the basement, it will be collected into the WaterGuard.  Any water that leaks in through the walls will be drained down into the WaterGuard by the CleanSpace Wall System.  The TripleSafe Sump Pump System will be pumping the water out of the basement.  The PowerBraces have stabilized the walls against further movement and over time may be able to straighten the wall back to the original position.  These systems all working together will create a basement that is dry so that the homeowner can use the valuable space for storage or extra living space without worries of foundation problems or water intrusion.

This is what the basement looked like when the homeowner called The Basement Doctor of Cincinnati. You can see the water that has been seeping in on the floor. 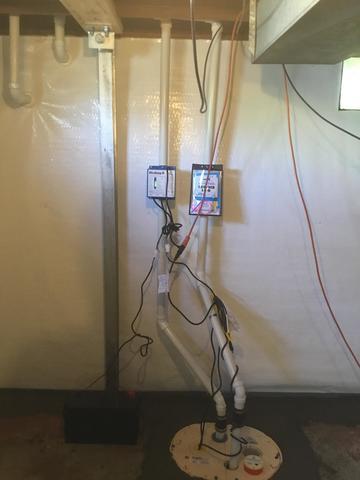 The shiny I-beam that is installed on the wall is the PowerBrace. You can see the Adjustable Bracket at the top that will be adjusted over time. The three pumps of the TripleSafe all fit into the TripleSafe Liner so it doesn't take up much space. WaterGuard has also been installed at the bottom of the wall to intercept the water that is coming into the basement.