Contact Us Online 1-513-434-6674
Photo Gallery
Home»Basement Waterproofing»Photo Gallery»Water resolved in a home with a basement and crawl space in Milford, OH

Basement Waterproofing Photo Album: Water resolved in a home with a basement and crawl space in Milford, OH

A Milford, Ohio homeowner was having problems with water seeping in through the window wells and noticing musty odors coming from the crawl space area.  There is a basement and crawl space area in the home.   They met with Walt, a Certified Inspector, to find a solution to this problem. Walt recommended that WaterGuard Basement Waterproofing System, a SuperSump Premier Sump Pump System along with an UltraSump Battery Back-up System, and WellDuct window well is installed to resolve the problem in the basement and CleanSpace installed in the crawl space. WaterGuard Basement Waterproofing System is installed along the perimeter of the foundation walls to intercept water that seeps in and drains it into a sump pump system.  The sump pump system then pumps the water out of the basement.   The WellDuct Window Wells are installed by drilling a hole in the foundation wall and installing a strainer on the outside of the wall.  Next, a window well duct is secured and sealed on the inside and connected to the WaterGuard.  When water seeps into the window well, it is drained down through the duct and into the WaterGuard.  Water is drained into the sump pump system and out of the basement.   The SuperSump Premier Sump Pump System is a high end 1/3 hp Zoeller cast iron pump.  It includes a WaterWatch Alarm that will sound if there is a pump or power failure alerting the homeowner to a problem with the system.  It also includes a Superliner that has 96 holes in it to allow water to flow in from under the floor and an Airtight Lid that will keep water from evaporating back into the basement, keep things from falling into the liner, keeps out odors and quiets the pump.  As an option, you can add on a battery back-up system, which is highly recommended.  The battery back up system will automatically start up if there is a pump or power failure and run on battery power.  It comes with its own battery and charging station. In the crawl space, we installed CleanSpace liner that is mold and vapor-proof plastic liner that is similar to a pool liner.  It is installed on the floor and walls of the crawl space.  This provides a barrier between the ground and the crawl space above.   These systems working together will keep the basement and crawl space dry.  Intercepting the water and keeping the moisture down in the basement will also help with the musty odors the customer was experiencing making the basement a space that the homeowner can use without dealing with musty odors and water intrusion. 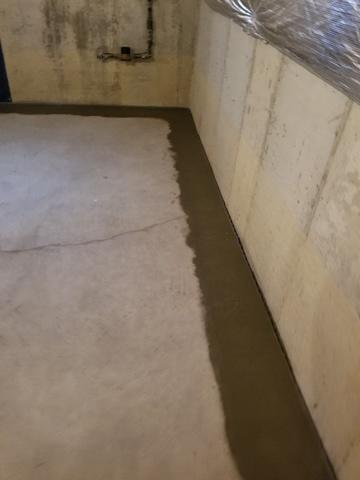 WaterGuard has been installed along the perimeter of the foundation walls. This will intercept any water that seeps into the basement and drain it into the sump pump system. 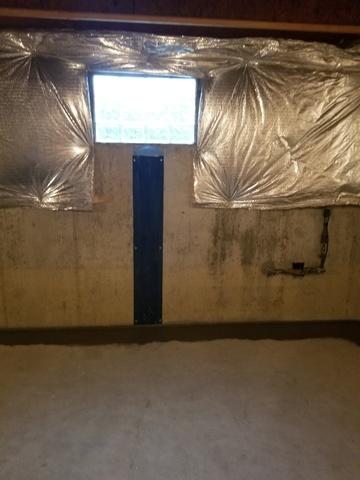 The WellDuct has been installed under the window to drain water from the window well into the WaterGuard and then into the sump pump system. 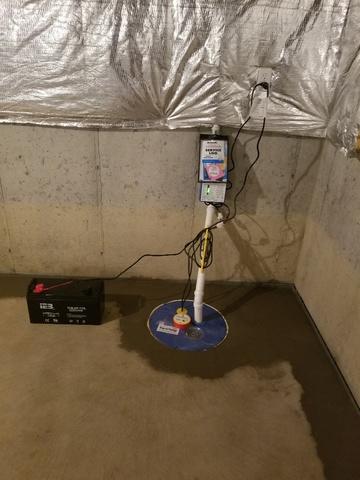 WaterGuard drains the water that has been intercepted into the sump pump system. Should there ever be a pump or power failure the UltraSump Battery Back-up pump will automatically turn on and run via battery power.