A Dayton, Ohio homeowner was having problems with water seeping into the basement through cracks in the walls and floor.  There was also some water coming through a window well.  They called The Basement Doctor of Cincinnati and met with Donny, a Certified Inspector for help resolving this problem. Donny recommended WaterGuard Basement Waterproofing System, a SuperSump Premier Sump Pump System, an UltraSump Battery Back-up System, BrightWall Paneling System, WellDuct Window Drain, and Glass Block Windows. WaterGuard is our patented piping system that is installed along the foundation walls.   This piping is installed just under the floor to intercept the water that is seeping into the basement.  The water is then drained into a drainage system, such as a SuperSump Premier Sump Pump System. The SuperSump Premier Sump Pump System has a high-end 1/3 hp Zoeller cast iron pump, it also includes the WaterWatch Alarm that sounds an alarm if there would be a pump or power failure.  The SuperLiner has 96 holes in it to allow water to flow in from under the floor.  The Airtight Lid keeps moisture from evaporating back into the basement, keeps out bugs and odors and quiets the pump, keeps things from falling into the liner, and is so strong you can stand on it.  Also installed, is the optional UltraSump Battery Back-up System.  This will run during a primary pump or power failure.  The UltraSump will run on battery power and comes with a battery and charging station. BrightWall Paneling System is 4x8 sheets of plastic paneling that are fastened to the walls with special fasteners.  BrightWall covers walls to give a semi-finished look to the basement as well as drain wall leaks down into the WaterGuard. WellDuct Window Drain is a drain for basement window wells.  A hole is drilled in the foundation wall just under the window and a strainer is installed on the outside.  The WellDuct is fastened and sealed on the inside of the wall creating a duct for water to drain down into the perimeter drainage system, such as WaterGuard.  The water is then drained into the sump pump to be pumped out of the basement.  In this home, a Glass Block Window was installed to replace the window. As you can see these systems working together will create a basement that the homeowner can use for storage without having to worry about water intrusion.

Basement wall before the WaterGuard Basement Waterproofing System is installed.

In this photo, you can see the water that has been seeping into the basement. 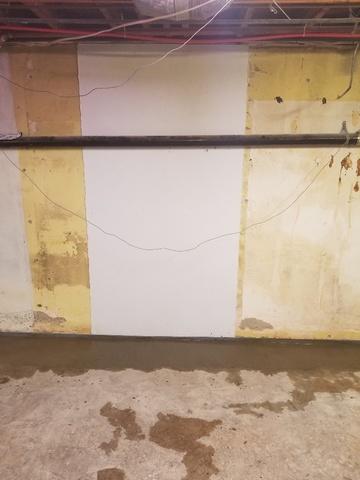 BrightWall Paneling System has been installed to drain wall leaks into the WaterGuard. It can then be pumped out of the basement by the sump pump. 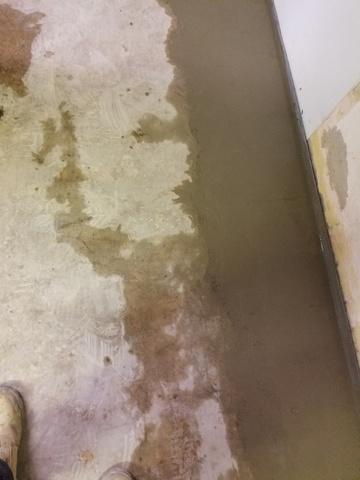 The WaterGuard Basement Waterproofing System has been installed. As you can see the only part that shows is the small wall flange that collects the water. Once the cement dries, it will become lighter in color and be even less noticeable. The one thing the homeowners will notice is water is no longer seeping into the basement! 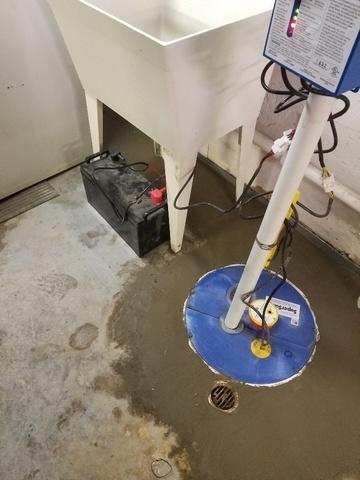 The SuperSump and UltraSump have been installed. A Maintenance free 120 amp sealed PowerPack is included along with a charging station.