A Cincinnati homeowner called The Basement Doctor of Cincinnati regarding problems with water seeping into the basement in several places.  This home was built in the 1960s, has a block foundation, and a sump pump had not been installed.  One wall of the basement had a large horizontal crack near the top of the wall.  This home also has a crawl space with a block foundation.  The homeowner met with Walt, a Certified Inspector, to find a solution to the problems the homeowner was having in the home.

Walt also recommended CleanSpace Encapsulation System to provide a moisture-proof barrier between the home and the ground below.   The natural moisture that is in the ground can seep up into the crawl space area and cause problems with mold, musty odors and humidity.

The SuperSump Premier Sump Pump System is a 1/3 hp high-end Zoeller cast-iron sump pump.  It includes the WaterWatch Alarm, SuperLiner and Airtight Lid.  The WaterWatch alarm will sound during a pump or power failure to alert the homeowner of a problem with the system that needs to be resolved.  The SuperLiner houses the pump, and will not crack or cave in.  The Airtight Lid keeps the water from evaporating back into the basement, keeps objects from falling into the liner, and helps to quiet the pump.

The PowerBrace System that Walt recommended, is steel I-beams that are secured tightly against the wall with brackets that are attached to the floor and floor joists.  These steel I-beams immediately stabilize the wall and protect it from further movement.  There is an adjustable bracket that can be tightened over time to potentially reverse the wall failure.

In the Crawl Space, we installed the CleanSpace Liner.  The CleanSpace Liner is a 20-mil-thick liner, similar to a pool liner, that is attached to the walls and floor of the crawl space to provide a moisture-proof barrier. 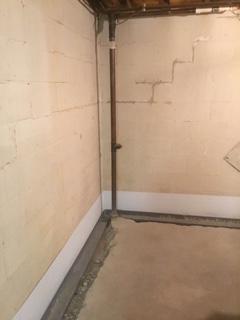 A trench has been dug out along the foundation walls to install the WaterGuard Basement Waterproofing System. 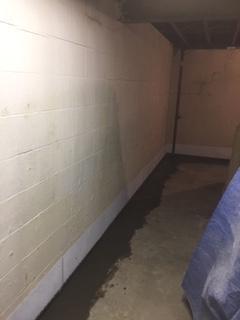 The WaterGuard will be finished with a layer of cement. 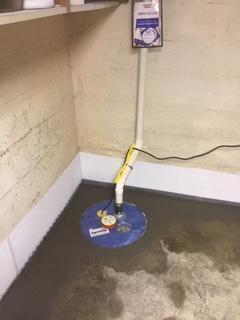 The SuperSump Premier Sump Pump System has been installed. This pump will be used to pump water out of the basement. 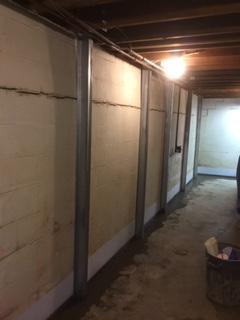 The PowerBrace System has been installed to stabilize this wall and the adjustable brackets can be tightened over time to potentially be able to reverse the wall failure. 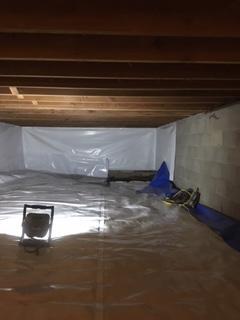 We installed the CleanSpace Liner in the crawl space area. This provides a vapor-proof barrier between the ground and the home. 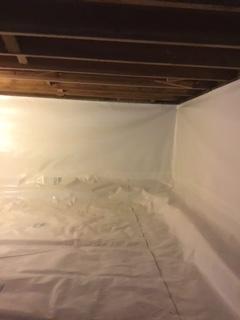 This is another view of the CleanSpace Encapsulation System. The bright white color really brightens up the crawl space making it easier to see into and access whenever needed.