A homeowner in Blanchester has been in his home for 50 years and is the original homeowner.  The home has a block foundation and there was a sump pump currently installed.  The homeowner was having problems with water seeping in at the floor and the walls were starting to bow in the basement.  He called The Basement Doctor of Cincinnati to find out what can be done with these problems he was having.

The homeowner met with Walt, a Certified Inspector, who recommended that WaterGuard Basement Waterproofing System, a TripleSafe Sump Pump System, and the PowerBrace System is installed to resolve these problems.

The TripleSafe Sump Pump System will pump the water out of the basement.  The TripleSafe is a three pump system.  Pump 1 is a Zoeller 1/3 hp Pump.  This is the pump that will be running most of the time.  If this pump would fail or become overwhelmed by the amount of water that is seeping into the basement the second pump will start up giving pump one a "turbo boost".  Both pumps working together can pump up to 6,200 gallons of water per hour out of your basement.  Pump 3 is an UltraSump Battery Back-up Pump.  This pump will run during times of power outages and runs on battery power.  Other features of this pump system include the TripleSafe Liner that holds all three pumps, the WaterWatch Alarm that sounds an alarm to alert the homeowner of a problem with the system, pump stands at the bottom of the liner to hold the pumps out of the sediment at the bottom of the liner and more.

The PowerBrace System is used to immediately stabilize walls and protect against any further movement in a failing wall.  Changes in the soil around your home due to moisture and frost causes the soil to expand.  This expansion results in the soil pushing on your foundation wall until it no longer can support it and the wall begins to crack, tip or bow.  To stabilize and protect the foundation from any further movement, PowerBraces are installed.  A PowerBrace is steel I-Beam is custom-fit to your basement wall and secured tightly against the basement wall with brackets attached to your floor and floor joists.   The I-beams are zinc-plated so they will not rust so they will look great for many years to come and the homeowner has the peace of mind that the foundation is now stabilized.  The patented PowerBraces can also be adjusted over time to straighten a bowed wall without having to disturb your landscaping. 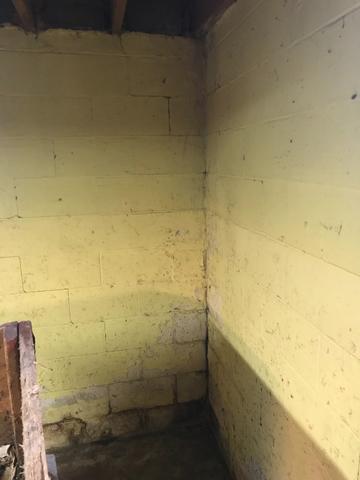 Water is seeping into this basement between the wall and the floor. There are also some cracks in the walls. 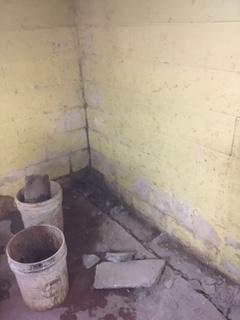 Preparing for WaterGuard. A trench has been dug around the perimeter to install the WaterGuard Piping. 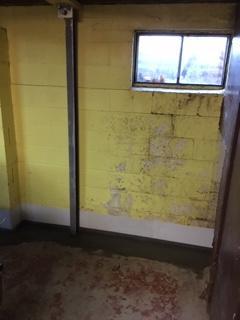