Contact Us Online 1-513-434-6674
Case Studies
Home»Basement Waterproofing»Case Studies»SmartJacks used on a house with a stone foundation in Waynesville, OH

Basement Waterproofing Case Studies: SmartJacks used on a house with a stone foundation in Waynesville, OH

A homeowner in Waynesville, Ohio has a home that is 180 years old with a stone foundation.  The home has a cellar and a crawl space with a dirt floor.  One issue that the homeowner is experiencing is unlevel floors in the home.  The other problem is that there is some water seeping into the cellar.

We installed a supplemental beam and SmartJack Floor Supports under the crawl space are to solve the problem of the uneven floors.  A SmartJack is a high-capacity adjustable steel peer used to stop settling and even raise your floor back up to the original position.  SmartJack floor supports are installed by setting a structural stone in place.  Then a Smart Jack is cut to size and installed under the unlevel or sagging floor.  The adjustable screw is used to jack up your floor and can even be adjusted in the future if needed.  This will resolve the problem of the unlevel floors for the homeowner.

To resolve the problem of the water seeping into the cellar or crawl space areas the homeowner could have CleanSpace Wall System and WaterGuard Basement Waterproofing System installed.  CleanSpace is a liner, similar to a pool liner, that is attached to the walls with special fasteners.  This will keep the water from seeping into the living area and also drains wall leaks down into the WaterGuard.

WaterGuard is a piping system installed along the foundation walls and is used to intercept water that seeps into the basement.  The water is then drained out of the basement through the sump pump system.  We have several sump pump models to chose from including the SuperSump Premier Sump Pump System, a TripleSafeSump Pump System, a SmartSump that is designed especially for crawl spaces, and an UltraSump a battery back up sump system.  These products would be a great addition to the home and would protect the area from water intrusion, making it a more usable space.

Homeowners!  Schedule an appointment with one of our friendly, knowledgeable Certified Inspectors. 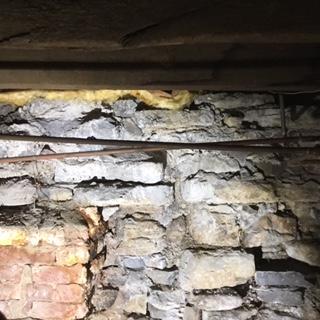 This stone foundation has settled over the years causing the floors to become unlevel and sometimes allowing water to seep through.