The original homeowner of a 10-year-old house in Piqua, Ohio was having problems with water seeping in on the basement floor.  The Walls were concrete with styrofoam insulation.  There was a sump pump installed.  The homeowner needed a permanent solution to this problem so he called The Basement Doctor of Cincinnati and scheduled an appointment with Donny, a Certified Inspector.

Donny met with the homeowner and recommended the WaterGuard Basement Waterproofing System and CleanSpace Wall System to solve the problem with water seeping into his basement.

WaterGuard Basement Waterproofing System is a sub-floor drainage system that is installed around the perimeter of the foundation walls.  This piping system intercepts the water that seeps in and drains it unseen into a sump pump system where it can be drained away from the home.

CleanSpace Wall System is a is 20-mil thick plastic liner that is fastened permanently to the basement walls.  It stops water from coming into the basement living space, is a fast, economical way to cover ugly walls, and drains water leaks into a drainage system below, such as WaterGuard.  This bright white plastic really brightens up the basement.

With this system in place, any water that leaks into the basement would be drained down into the WaterGuard Basement Waterproofing System and will be pumped away from the house through the sump pump system.  The homeowner now has peace of mind that the basement will be safe from water intrusion. 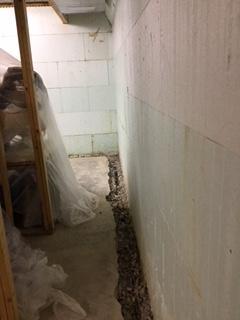 A trench has been dug around the perimeter of the foundation walls to set the WaterGuard. 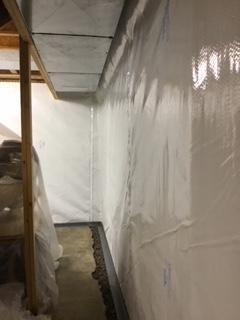 The white plastic CleanSpace has been installed. The WaterGuard has been set into the trench that was dug along the foundation walls. 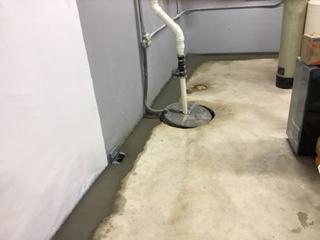 After the WaterGuard has been installed, a layer of concrete is laid over the piping system.

Before & After Photos: WaterGuard and CleanSpace in Piqua, OH
Back to Previous Page
Back to Case Studies