A homeowner in Cincinnati was getting ready to start finishing the basement and noticed that there was some water that was seeping into the basement in a few places and wanted to have that resolved before beginning the project.  The home has a poured foundation, has a drain in the middle of the floor, but no sump pump had been installed.  The homeowner scheduled a free estimate with Jeff, a certified inspector, who recommended that WaterGuard Basement Waterproofing System, a SuperSump Premier Sump Pump System, and an UltraSump Battery Back-up System is installed to resolve these problems and prepare the basement for finishing.

WaterGuard Basement Waterproofing System is a patented piping system that is installed under the floor at the base of the foundation wall and is used to intercept the water that seeps into the basement.  The WaterGuard is finished with a layer of cement and will intercept the water unseen by the homeowner.   The water is drained into a sump pump system to be removed from the basement.  Also, recommended for this basement is a BrightWall Panel.  The BrightWall Panel is a plastic panel that is used to cover the wall, drain wall leaks into the WaterGuard, and keeps the moisture from permeating into the basement.  These panels can be used behind drywall or used to cover the walls like traditional paneling.  The bright white color brightens up the basement giving it a semi-finished look.

The SuperSump Premier Sump Pump System is used to remove the water from the basement.  This system includes the WaterWatch Alarm, SuperLiner with Clean Pump Stand, and Airtight Lid.  The SuperSump has a 1/3 hp pump that will remove the water from the basement.  The WaterWatch Alarm will alert the homeowner if there is a power outage or if the water has reached the level that the pump should have turned on.  This gives the homeowner time to resolve the problem before damage can occur.  The SuperLiner houses the pump and will not cave in or crack.  Inside the liner is a Clean Pump Stand.  This plastic stand lifts the pump up out of the sediment that settles on the bottom of the liner and will help this pump to perform reliably for many years.  The Airtight Lid that is installed onto the SuperLiner will keep the water from evaporating back into the basement.  It will also keep objects from falling into the liner, and help to quiet the pump.

Jeff also recommended that the homeowner have the UltraSump Battery Back-up System installed.  The UltraSump will automatically start up during a pump or power failure to remove water from the basement.  Both of the pumps will fit into the SuperLiner and will not take up much space in the basement.  The UltraSump comes with its own battery and charging station.

Now, with these products installed, the homeowner can safely finish the basement without worries of water intrusion ruining the finished work.  Basement Systems also has wall systems that can be used to cover the walls and give the basement a finished look and can withstand the basement environment.  Also to be considered, is ThermalDry Flooring, a special flooring made especially for basements. For more information, call The Basement Doctor for an estimate. 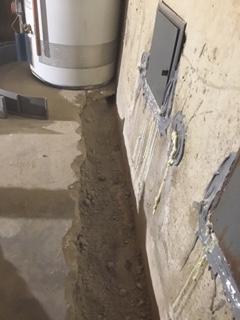 A trench is dug out along the foundation wall to install the WaterGuard piping that will intercept the water that is seeping into the basement. 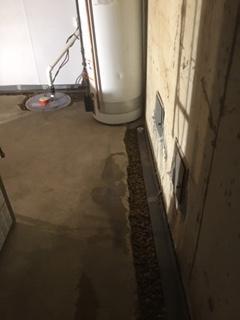 The WaterGuard has been installed. 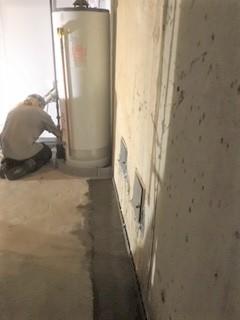 The WaterGuard piping is finished with a layer of cement, leaving only a small wall flange exposed to allow water to flow in from the top. 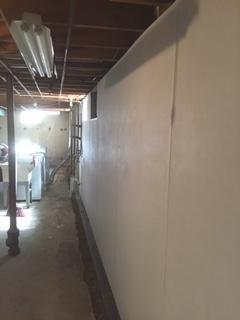 The BrightWall Panel is permanently attached to the wall and will drain wall leaks down into the WaterGuard. 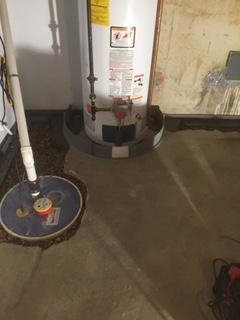 The SuperSump Premier Sump Pump System will remove the water from the basement.