An older home in Cincinnati, Ohio that has a foundation made out of block and stone was cracking and leaking water into the basement.  The homeowner needed a solution for this problem so they called The Basement Doctor of Cincinnati.

The homeowner met with Donny, a Certified Inspector, who recommended that the Helical Pier System, PowerBrace System, WaterGuard Basement Waterproofing System, SuperSump Premier Sump Pump system, UltraSump Battery Back-up System, CleanSpace Wall System, and GlassBlock Windows are installed to resolve the problems that the homeowner was having in the basement.

Helical Piers are steel piers that are mechanically screwed into the ground until it reaches competent soil.  A bracket is attached to the helical pier and also to the foundation of the home.  The weight of the home is transferred to the competent soil through the pier to immediately stabilize the foundation and an attempt is made to lift the foundation to a level position.  We did not install the Helical piers for this project but could do them at a later date.

We installed a PowerBrace System for the homeowner to stabilize the foundation walls and protect them against further movement.  The PowerBraces are steel I-beams that are secured tightly against the walls and attached with brackets to the floor and floor joists.  The PowerBrace has an adjustable bracket that can be tightened over time to potentially resolve the wall failure.

The SuperSump Premier Sump Pump System is a high-end 1/3 hp Zoeller cast iron sump pump.  This pump can pump up to 2,650 gallons of water per hour out of the basement.  It comes with a WaterWatch Alarm, SuperLiner and Airtight Lid with an Airtight Floor Drain.  The UltraSump is a battery back-up pumping system that will automatically start up if there is a pump or power failure to pump water out of the basement.  It comes with its own battery pack and charging station.

CleanSpace Wall System is our most economical wall system.  CleanSpace is a bright-white plastic liner, similar to a pool liner.  The CleanSpace Liner is attached to the walls with drilled-in fasteners and is used to cover the walls as well as drain any wall leaks down into the WaterGuard System.  The bright white color of the CleanSpace Liner reflects the natural light and brightens up the basement.

Now with the PowerBraces installed, the homeowner will have peace of mind that the foundation is stabilized and the property value restored.  The WaterGuard, sump systems, and CleanSpace all working together will keep this basement dry and the homeowner will be able to use the basement without water intruding into the basement.  Schedule an appointment with a Certified Inspector to see what combination of products would best serve your basement needs.

This is what the basement looked like before we started the job.

WaterGuard Basement Waterproofing piping is being installed into the floor. 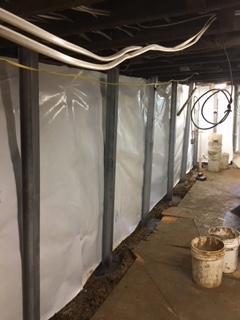 The steel beams are the PowerBraces that will stabilize the foundation walls. 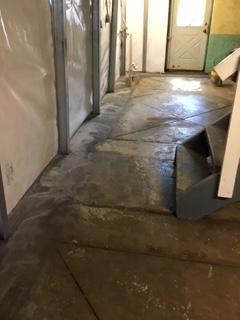 The WaterGuard is finished with a layer of cement, leaving only a small wall flange exposed. 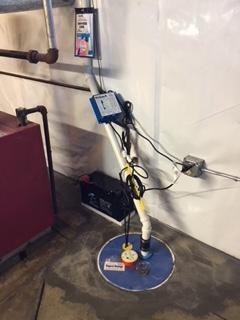 The SuperSump Pump and UltraSump Systems are both installed into the SuperLiner and do not take up much space in the basement.