A Cincinnati homeowner was having problems with a bowing wall and water seeping into the basement.  The house was built in the 60's and had block walls.  He called The Basement Doctor of Cincinnati for help solving this problem.

The homeowner met with one of our Certified Inspectors, Chris, who recommended the WaterGuard Basement Waterproofing System, a SuperSump Pump System, and PowerBraces.

WaterGuard is our patented sub-floor drainage system that intercepts water and drains it away unseen to a sump pump system, such as our SuperSump.

The SuperSump Pump System has a cast iron pump, SuperLiner, Airtight Lid, WaterWatch Alarm, and a Clean Pump Stand.  The pump can pump 2,650 gallons an hour.  The Airtight Lid keeps things from falling into the sump pump well, keeps out bugs and odors and quiets the pump.  The WaterWatch Alarm sounds an alarm, similar to a smoke detector, to alert the homeowner if there would be a problem with the sump pump.  The Clean Pump Stand lifts the pump out of the sediment that collects at the bottom of the liner.

A PowerBrace is an I-Beam that is secured to the wall at the floor joist and the floor to permanently and immediately stabilize the wall.  The PowerBraces can be tightened over time and can potentially straighten the wall.

Now the homeowner will no longer have to be concerned about stabilization of the wall, or water seeping into the basement. 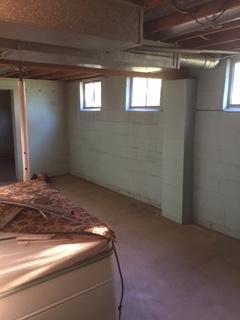 In this photo, you can see where the wall has started to tip backward. 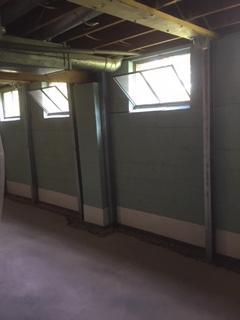 The PowerBraces have been installed. They are secured to the floor joist above and the floor below. 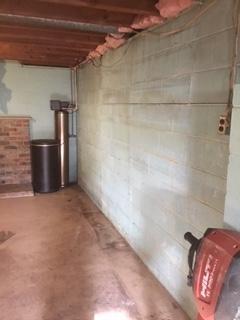 Another wall that is starting to tip backward and bow. 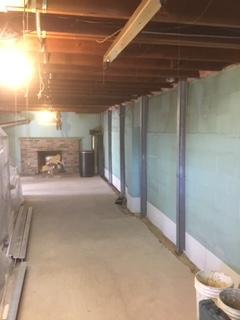 Here the PowerBraces have been installed. You can also see the trench is ready for the WaterGuard Placement.