Homeowners were experiencing water seeping into a partially finished basement from several leaky window wells.  This can cause damage to the drywall, mold and a wet, uncomfortable basement.  They called The Basement Doctor for an estimate and a solution to this problem.

Bobby went out to address the situation.  He determined the best solution would be to install a window WellDuct, WaterGuard and sump pump systems to drain the water out of the window well and to prevent any water from seeping into the basement.

The WellDuct system is installed by drilling a hole through the foundation wall below the window, a strainer is attached to catch any debris that may come into the window well.  An interior duct is fastened and sealed to the inside foundation wall creating a pathway for the water to drain from the window well down into a perimeter drain at the base of the floor.  The water is then pumped out of the house through a sump pump.

The sump pump systems chosen were the SuperSump, with UltraSump battery backup system and a TrippleSafe Sump system.  At one end of the basement we installed a SuperSump system which also includes a WaterWatch alarm that will sound if there are any problems with the sump pump, a SuperLiner which will not cave in or crack, and an airtight lid to prevent anything from falling into the sump, keeps moisture from evaporating back out into the basement, and also reduces noise when it is running.  The second sump System installed is called a TripleSafe Sump System.  The TripleSafe Sump system includes three pumping systems.  The first system is the main pump that will come on when the water reaches a designated amount inside the SuperLiner.  The second pump operates if the first pump would ever fail or become unable to handle a large flow of water, the third pump is a battery back up pump that has its own battery and automatic charging system.  With these systems in place, the customer will now be able to rest comfortably that their basement will be safe from flooding waters and be able to enjoy a dryer, more comfortable basement for years to come. 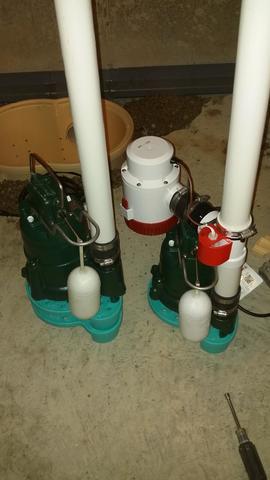 This is the sump pump system ready for install.